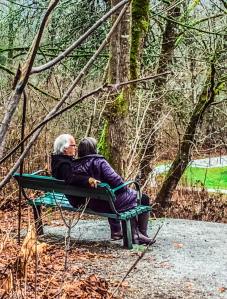 This is my final post in this series. Thank you to my readers who have followed along. Thank you also regarding the seriousness of what is said here. Cancer, of course, is no laughing matter. It can be beaten. It can also kill. I know it can also be scary.

Don’t keep it to yourself!

Here is the main point of this fourth part of my series. If your body seems to be acting out of character don’t ignore it. It may be telling you something is wrong and needs to be attended to. It may be warning you of a cancer of some kind. Please don’t say, “This couldn’t happen to me.” It can happen to you! I hate to remind you but you are human. Please don’t keep it to yourself!

I am currently reading Stephen Kings book, Stephen King: On Writing. Part of the book is autobiographical where readers are given a peek into Mr. King’s life. There is an account in the book that caused me to reflect on the importance of the early detection of cancer. His mother ignored signs that she was ill. She kept it to herself. She died of uterine cancer.

A Reflection On One Loved

Cancer is a brutal fiend. It does not discriminate between children or adults. Its job is to cause misery and pain as well as to kill. During my wife’s most recent bout with cancer I reflected on a young girl we knew a number of years ago.

Many people, including my family, loved her. She died from cancer at twelve years of age. A beautiful gentle soul who loved her family. She was only twelve at the time she died, the same age as one of my children. We all hoped and prayed she would live. We still think of her and miss her. At her memorial service there were a lot of tears shed. These many years after this young girl’s death we still remember her with great fondness.

Terry has survived cancer without serious complications twice. I’m not saying my wife is indestructible. She bears physical scars of cancer on her body. If cancer cannot beat us it likes to leave scars as a reminder of its assault on us.

There are emotional scars as well. I shared with you in the first part of this series some of my personal response to the cancer news. Here is what I wrote.

… Although the cancer that has shown in her body is a non-aggressive type the initial shock of the news left its scars…Cancer can mess with one’s mind. Even a “non-aggressive” cancer may cause some fear. It can give your emotions a workout. These are the “scars” I am talking about (Things That Matter In the Face of Cancer: Part One, Dec. 13/17).

I am not a hero who laughs in the face of enemies like cancer. I do not run from such enemies either. One cannot forget or ignore the scars of cancer.

Terry dreaded the thought of having to experience chemotherapy or radiation therapy. She didn’t have to take either. She would have refused such treatments if the doctors had deemed them necessary.

Terry views her surviving from cancer as a new lease on life. She is aware that many people who experience cancer do not survive. She is one who takes life as it comes without being fatalistic. She embraces the things in life that matter in her life, her family, her faith in Jesus Christ and friends.

As her husband, the fact of Terry surviving cancer is humbling. It reminds me we are all vulnerable and fragile. Surviving cancer is a gift and not a certainty. It would have crushed me if Terry had not survived! Cancer is in reality a violator of the dreams and plans people have. To survive it is indeed humbling.

Please, if you suspect something is wrong in your body see your doctor. Don’t keep a health scare to yourself. Instead of allowing cancer to terrify you, fight it. Let cancer fear you!

2 thoughts on “Don’t Keep It To Yourself: Things That Matter In the Face of Cancer: Part Four”

This site uses Akismet to reduce spam. Learn how your comment data is processed.